Could Expo Shanghai Online be the Virtual World Killer App? 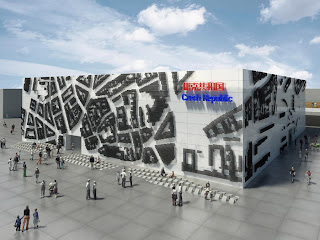 The next officially sanctioned worlds fair is set for Shanghai China in 2010.

The Chinese, making good on many years of investments in Virtual World technologies are producing an online version of the fair.

Could this be the Virtual World killer application that will introduce millions to advanced VR technology? Note that IBM is already experimenting with portable avatars between different worlds, imagine if your Second Life identity could actually tour a fair like this. If Linden is reading this, you should invest in an experiment.

Several governments have already lined up to build virtual pavilions. The Czech Republic always does good ones (above).

The Chinese are very well equipped to do this. What most North Americans do not realize is that they are in danger of becoming legacy since broadband is so restricted in their continent. Parts of East Asia blow the United States away in multimedia broadband technology.

Here is a promotional video I found on You Tube for this event.

Email ThisBlogThis!Share to TwitterShare to FacebookShare to Pinterest
Labels: Politics and Current Events, You Tube