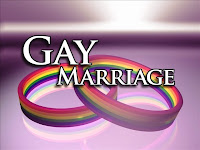 It appears that two anti-gay marriage renegade Democratic State Senators in New York have crossed party lines- and moved control of the chamber to the Republicans. They probably won't allow the vote for gay marriage to come up this year.

The Democrats who switched are also subjects of corruption investigations and may have cut some sort of deal with the Republicans to defend themselves. The Democrats are saying the vote is illegal and it is a mess.

Whatever the case, it is clear that gay rights are very close to passing in the two huge American states of New York and California. It is simply a matter of time before a proposition that can win is put on the ballot in California (proposition 8 lost by 52% - 48%), and one will be on the ballot in 2010. In addition, younger voters who are much more supportive of gay rights are replacing older ones. Social intolerance increases in America as you grow older.

Still, it came so close in New York. It would have been a great thing to celebrate at the 40th anniversary of Stonewall Day, on June 27, which I will be celebrating all that week here.
Posted by Eddi Haskell at 11:51 AM