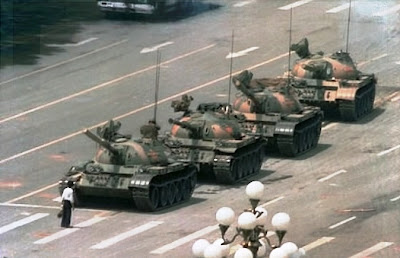 20 years ago today, the Tienanmen Square protests, started by students seeking basic democratic freedoms of speech and political organization, were violently put out by the Chinese government who feared radical change. Deaths are estimated to be 1,000 - 7,000 (Chinese Red Cross); some put the figure as high as 30,000 across China.

Although China has made great progress in the past 20 years, and certainly has elevated human rights through the elimination of much rural poverty, basic freedom of expression does not exist, and persecution of native peoples such as those in Tibet continue.

I did visit Beijing in the summer of 2007, and found the place clean and relatively affluent. No one looked that oppressed to me to be honest about it, and there actually are gay bars and clubs to go to. There was a Catholic cathedral across the street from where I stayed that you could pray at without police around, it was very open to the public.

I do not think China can be called a police state. And China does not invade other countries to install their own system of government. Yes, basic political freedoms do not exist in this one party state. And no one wanted to talk about politics there, they were way too nervous.

Still, I think we need to salute all these brave young people who lost their lives 20 years ago. Since there is not that much coverage of this, I will show this video here.