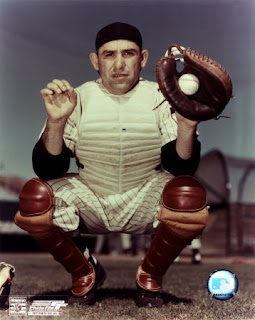 No, it's not my real life mother - it is her birthday though, and we are going to see the new Star Trek movie. And she is not 84 either. In fact, if she sees this it will piss her off.

It is American baseball great and pundit Yogi Berra.

Here are some of his famous quotes!

A nickel ain't worth a dime anymore.

Always go to other people's funerals, otherwise they won't come to yours.

Half the lies they tell about me aren't true.

I never said most of the things I said.

I wish I had an answer to that because I'm tired of answering that question.

If the world was perfect, it wouldn't be.

If you ask me anything I don't know, I'm not going to answer.

It ain't over till it's over.

It was impossible to get a conversation going, everybody was talking too much.

Nobody goes there anymore. It's too crowded.

The future ain't what it used to be.

You can observe a lot by just watching.

The towels were so thick there I could hardly close my suitcase.
Posted by Eddi Haskell at 12:10 AM