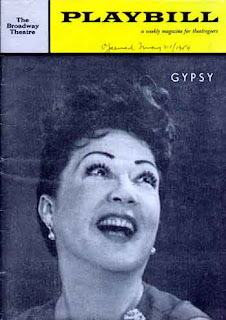 Broadway is remembering one of it's greatest moments. The great musical Gypsy, starring Ethel Merman, opened on Broadway in 1959 tonight.

Gypsy was made into a movie a few years later, in 1962. . In a move that many regret, Ethel's role was given to Rosalind Russell whose voice was a bit- uh- harsh. I found this on You Tube. Someone dubbed Ethel Merman's voice onto Ms. Russell. Gives you an idea of how the original Gypsy must have looked since I could not find a tape of the performance.