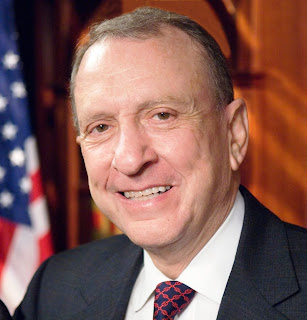 In case you have not seen the news Senator Arlen Specter from Pennsylvania switched parties today and became a Democrat. This is a rare event in the United States.

And this is a very important development for potential Gay Rights and other social legislation. Read on if you want to find out why.

Why is this such a big deal? After all, out of 100 Senate seats the Democrats control 58 seats and the Republicans only 41. (the last Senate seat from Minnesota is still undecided from the November 2008 elections but it looks like Democrat Al Franken, the comedian, will win it after court challenges are settled).

Well, due to some obscure political rules these is something called a Fillibuster in the United States Senate. Basically, Senators can argue forever, stalling votes on important bills like Supreme Court confirmations. There must be 60 Senators who vote in favor of "cloture" to end debate before a bill can be voted on.

Some filibusters have gone on for days, Basically, Senators can talk all they want. Unless 60 Senators vote to end a debate, a bill can't be voted on. This gave the Republicans potential power to stop any Democratic legislation that President Obama needs to reform the United States government, restructure the lopsided for-the-rich American economy, and pass important social legislation.

What is very important is that gay rights may need to be ultimately settled by the votes of the 9 justices in the United States Supreme Court. The court is now overwhelmingly Republican appointed and conservative in outlook. It looks like President Obama though will get to replace 2 of the 9 judges soon, which has to be confirmed by the Senate. The Republicans had the power to stall any Supreme Court appointment with this filibuster until now.

So, this is very good news. And Arlen Specter, a friend of gay rights, will no longer be restricted by the dictates of his party bosses-- who would have cut off his campaign funds if he did not vote their way. Thank you Arlen!
Posted by Eddi Haskell at 3:13 PM