I'm angry about something: Opinion From Eddi Haskell 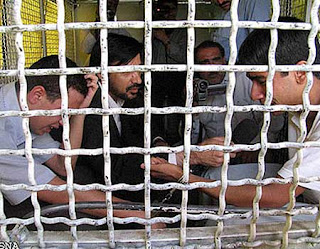 Today, in Geneva, a whole bunch of delegates walked out on one of the world's greatest bigots, Iranian President Mahmoud Ahmadinejad, started making his speech at a "racism" conference. I think the walkout was great. But this is not why I am angry.

I'm angry cause in the past few years, estimates are that over 400 gays have been executed in Iran, many of them minors who were tortured to death like the boys above were before their execution. There are many pictures of this public hanging that occurred in a festive carnival-type atmosphere in Iran on July 18, 2005.


Iran is perhaps the world's greatest enemy of gay people. The Iranian view is that if you have engaged in gay sex, you deserve to die in Iran regardless of your age. I think this is barbaric and needs to stop.

Let me repeat. It is a capital offense in Iran, and in some other countries, to engage in homosexual activities. And you can be convicted based on hearsay. Let's think about this. This country kills children based on the testimony of others who say they are gay.

And what do we do? NOTHING. We sit back and take it.

Violence against gays does not exist in all parts of the Islamic world (go to Istanbul to see one of the hottest gay scenes around), and some cultures are just as anti-gay as Islamic countries are; in Barbados for example anyone caught in a gay act can get life imprisonment. But it is also true that the greatest violators of gay rights are Islamic nations where Sharia law reigns. But I do not believe that Islamophobia is the right answer to this problem.

I'm angry because there should have been a walkout based on what Iran does to gay people at any of these so called "human rights" conferences. And we should not rest until this happens.
Posted by Eddi Haskell at 9:20 PM