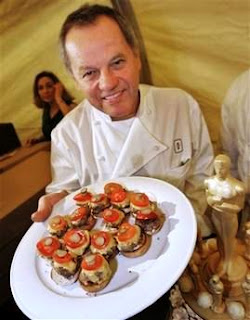 The real life me moved back to the United States from the U.K., to South Florida, in September 2005, just in time to be hit by the most intense hurricane ever formed in the Atlantic basin, Hurricane Wilma!

This has to be a perfect example of lousy timing. But I did get to meet Wolfgang Puck of Spago fame!

On October 25, 2005 Hurricane Wilma blasted through South Floria. I actually was in the eye of the hurricane for over 30 minutes, and went outside (you should never do this btw death from fallen electrical wires is a big cause of death) to see the winds die down from over 100 mph to nothing in a matter of a few minutes - and then pick up again.

Although peak winds were officially only 108 mph, making it a category 2, one weather station near me reported a 135 mph gust. I think they played around with the official report since it would have raised our insurance premiums through the roof.

Our area must have been hit by a mini tornado (many form during hurricanes). Every single tree was knocked down, and the damage done to the area was devastating. The Hurricane itself lasted for a good 8 hours and howled like a wild animal, it was one of the most frightening things I have ever lived through!

We lost power for two week. Mom and I escaped to Orlando (it is 200 miles away and had minimal damage) the day after the hurricane and rented a Disneyworld condo for two weeks. We told everyone that we were hurricane evacuees and got really good treatment in restaurants. We never had to wait on line.

We did feel guilty since Katrina hit earlier that year in New Orleans and those people had horrendous treatment after the storm.

Wolfgang Puck himself came to see us in one of his restaurant's at Disneyworld and gave us free "samples" of his food! Having your mom with you will do this!

Email ThisBlogThis!Share to TwitterShare to FacebookShare to Pinterest
Labels: Celebrities