On Wednesday night, the Jewish holiday of Passover will begin. This festival of freedom has been celebrated for over 3,000 years. Jews around the world will eat really tasty and crisply matzoh crackers, and entire families will get totally bombed at festive meals (called Seders) by drinking many bottles of really bad and heavy red wine to commemorate the holiday and get totally bombed in the process. 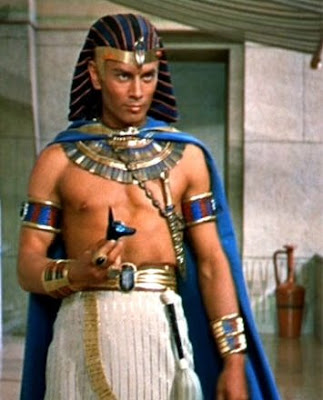 I celebrate Passover by watching one of my favorite movies, the 1956 camp classic, The Ten Commandments. It must be the most overacted film ever made - check out the woman yelling at 7:30 in the video LOL.
The movie is also a pectoral fest- some guy is showing off his chest in every scene. Yul Brenner at Pharaoh in his Edith Head costume is hot but particularly campy. (above). Yul used to fuel my imagination when I fist discovered the joys of looking at the male body (along with Championship Wrestling which I used to watch with Grandma!).

The most famous scene, the parting of the Red Sea which I show above is actually a very good special effect- it is not digital and one of the best ever done. If you have only seen it on television, or in parodies, make sure to rent it and see it on the big screen at least once!
Posted by Eddi Haskell at 2:00 AM