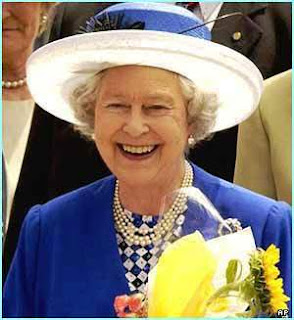 Queen Elizabeth 2 is 83 today (although her official birthday is celebrated in June), and I was trying to figure out what video to show.

The Royal Navy is going to build two huge 65,000 ton aircraft carriers, The Queen Elizabeth and the Prince of Wales. They are going to enter service (these things always get delayed) in 2016 and 2018. This video, made two years ago, shows some amazing graphics and I decided to put it up in honor the The Lord High Admiral of the Royal Navy, Queen Elizaberth II. Check it out, it's cool.


By the way, if you like Britain and the Royal Family, I did this video for YouTube using some old stills of the Queen Mum, Queen Elizabeth's mother who died at 101 years old in 2002 (she was also named Elizabeth, it can get confusing). It is incredible to thing that this great woman lived in three centuries (she was born on August 4, 1900 when Queen Victoria was still alive - the 20th century did not begin until January 1, 1901). Back in 1940, when Britain stood alone against insurmountable odds, her smile (with Winston Churchill's oratory) held the country together during the Blitz. Please take a look at this if you like old World War 2 stuff.

Email ThisBlogThis!Share to TwitterShare to FacebookShare to Pinterest
Labels: Celebrity Birthdays, Eddi Haskell on You tube, You Tube