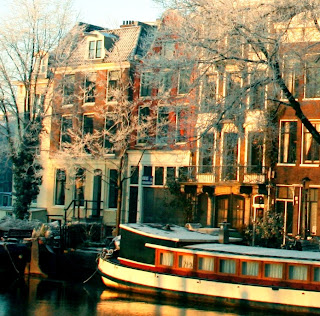 I did not take this photo, I pulled them out of Google images.

One thing you can do in Google images btw is ask for only large resolution images like I did here.

I converted this image of the Zwanenburgwal (meaning swan's canal or something like that) in Amsterdam in the Google's free Picasa program to black and white, and highlighted a part on the page in color.

I used to live here for six months when I lived in Europe a few years ago. I lived on the second story of the house that I have highlighted. It was called the flower house, dated back to the 1500's, and had uneven floors and stuff, but it was an amazing experience. 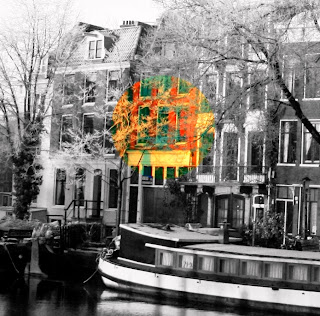 I got it for a really good rent from some rental agency. Little did I know that it was an illegal sublet, and that the real landlord would have me tailed to testify against the tenant who sublet it to me with the Dutch housing authorities. I should have had some idea when the sleazy landlady named "Dinny" told me to tell everyone that I was her Canadian nephew if they asked, which was unbelievable, since she was a tiny blond Dutch woman and I have dark eyes and hair. There is no way in hell we could have been relatives.

I just read that both Rembrandt and Spinoza lived on my canal; I had no idea about this when I lived there. I was too busy eating space cake (I spent an entire day not being able to determine which way was up and down once after eating too many of these) and going to super hot clubs on gay Warmoestraat and Regulierswarsstraat at the time . But it was a once in a lifetime experience! 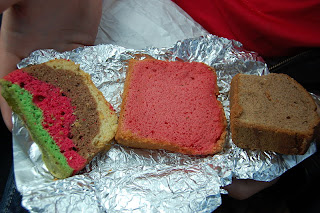 Spacecake slice. Warning: only eat one slice.
Posted by Eddi Haskell at 12:13 AM